Some thoughts on who we are 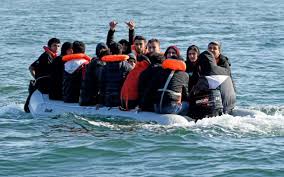 There is no such thing as an illegal asylum-seeker. Under the terms of the 1951 UN Convention on Refugees, anyone is entitled to seek asylum if ‘owing to a well-founded fear of being persecuted for reasons of race, religion, nationality, membership of a particular social group, or political opinion, is outside the country of [their] nationality, and is unable to or, owing to such fear, is unwilling to avail [themselves] of the protection of that country.’

There is no law that says they have to apply for asylum in the first country they escape to. The vast majority do, however, which is why there are nearly 3.7 million refugees in Turkey (from Syria), 1.4 million in Pakistan (from Afghanistan) and 1.2 million in Uganda (mostly from South Sudan or the Democratic Republic of Congo).

The much-cited EU Dublin Regulation – which will anyway cease to apply in the UK at the end of this year – applies only to which country should deal with an application for asylum, not where that application should be made.

There is no law that says asylum-seekers have to enter a country legally. For obvious reasons, if you pause to consider why they are seeking asylum in the first place.

The UK is not being invaded. The total number of refugees and asylum-seekers (2018) living in the UK is around 170,000, approximately one quarter of one per cent of the total UK population. And if the government can happily offer residence rights to up to three million people from Hong Kong who have British National Overseas status, it is hard to see why the four thousand desperate people who have crossed the Channel so far this year represent a ‘national crisis’.

It is important to be clear about this: crossing the Channel in a rubber dinghy is exceedingly dangerous. The fact that people are prepared to pay thousands of dollars to ruthless smugglers for the opportunity to drown at sea tells you all you need to know about the desperate straits in which they find themselves.

As it happens, I have seen migration smugglers in action. Not in northern France, but in Mexico, where I observed desperate young men from Guatemala, Honduras, and El Salvador risk their lives by leaping on board a moving freight train – they called it La Bestia  (The Beast) – which they hoped would help them cross the border into the US.

I noticed, however, that a couple of them didn’t even try to board the train as it lumbered by. Why not? Because they were in the pay of the smugglers, who employed them to extort payment from their fellow-migrants before they were ‘allowed’ to take up position by the side of the tracks. Venality is not the sole preserve of heartless governments, and we should never under-estimate the potential for cruelty of our fellow-humans.

To me, this all feels very personal. In 1939, my maternal grandmother, a Jew living in Nazi Germany, applied for refugee status in both the US and the UK. Neither application was successful, and in 1941, she was murdered by a Nazi death squad. (The full story is here.) If she had had the chance to clamber onto a rubber dinghy to find her way to safety, I very much hope she would have taken it.

It is a dangerous delusion. What we share is a common humanity, not the same skin colour or religious identity. Look at the top four names on the official list of UK government ministers: Boris Johnson, whose paternal grandfather was born Osmal Kemal and who is descended on his mother’s side from Munich-born Hubert Freiherr von Pfeffel and Hélène Arnous-Rivière; Rishi Sunak, son of Kenyan-born Yashvir and Tanzanian-born Usha; Dominic Raab, whose Jewish father fled to the UK from Czechoslovakia in 1938; and Priti Patel, whose parents, of Gujarati origin, came to Britain from Uganda.

Which brings me to Kamala Harris (it’s KAM-ala, by the way, as in PAM-ela) who has been chosen by the US Democratic Party’s presidential candidate Joe Biden to be his running-mate in November’s election. She’s the daughter of a Jamaican father and an Indian mother, and if the Biden-Harris tickets wins, she’ll then be in pole position to become the first woman to win the White House in 2024.

Barack Obama’s father, of course, was Kenyan. Winston Churchill’s mother was American. EasyJet was founded by Stelios Haji-Ioannou, and Tesco by Jack Cohen, whose father was a Jewish immigrant from Poland.

Who knows what future entrepreneurs, national leaders, millionaires, are on those rubber dinghies, bobbing so dangerously across the Channel? Who knows what their children and grandchildren might achieve if given the chance?

So let’s hear it for the immigrants. And the refugees. And the asylum-seekers. And if you want to do more to help fight their corner, or simply learn more about them, let me recommend two charities: Refugees at Home, and Refugee Action.

Thank you for this, Robin. Beautifully put.

Lovely! As one who is half English with Huguenot ancestry, half German which means I have at least a quarter of Slav ancestry with a touch of Swedish and Jewish along way back, this all makes perfect sense to me. And I wish your grandmother had got on a boat. I wish even more that she had never needed to do so.

I agree, beautifully and simply put. But does however beg the question why, when our top politicians are clearly multi-racial/national in origin themselves, what can have got into their minds to convince themselves that their mission is to keep the ‘foreigners’ out?

I take nothing away from your excellent piece. However I do ask the question. What would have happened if all of our men ran away from the fight in WW1 & 2. I have no objection whatsoever with immigration and notice that you use the names of successful people who have made a difference. Not only for themselves, but to the many thousands who they have given employment. All of which is of huge benefit to this country. Those that are prepared to risk the lives of women and children do not come here with those values in mind. Tell us why they must get here and not any other EU country. I'm guessing the welfare state system would not work in their favour elsewhere. I am not racist, I have many friends of many nationalities all of whom pay their way. These migrants will not.

Thank goodness for your lucid voice of sanity, Robin.

In response to Modboyroy's comment above, the comparison with the UK in WW1 and 2 really doesn't work. The UK wasn't invaded and society in the UK wasn't in a state of collapse. It is also worth adding that refugees who settle in Germany get a vastly better deal from Germany's welfare system than refugees coming here. Immigrants who are locked up in inhumane detention centres may not be able to 'pay their way', but most immigrants to this country have been of enormous benefit to this country - witness the staffing of the NHS.

Thank you for your excellent blog, Robin. I hope you and yours are well in these dark times.
Best wishes, Brian