This has not exactly been a good week for politicians -- so I've decided to make the first ever Lustig Politician of the Week award.

And it goes -- fanfare, please -- to the former deputy prime minister of Australia, Anthony Albanese. He issued a press release on Thursday in response to the news that the man in charge of Sydney airport plans to retire. I'll quote it in its entirety: "Good." 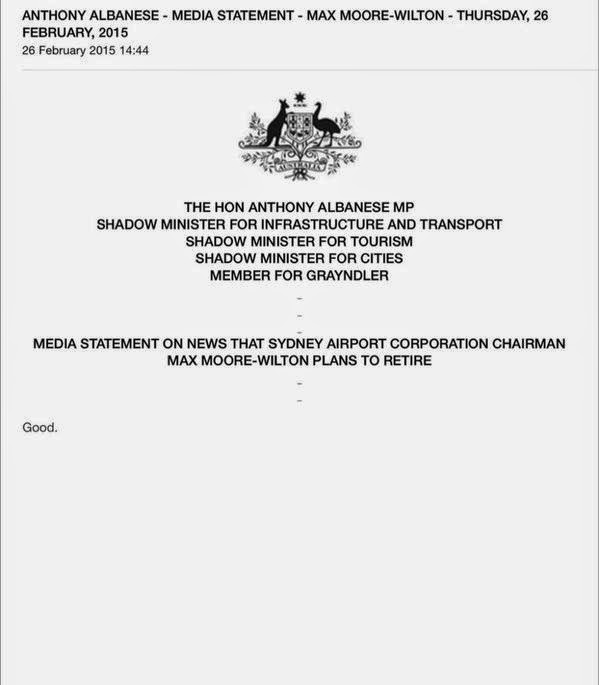 Yup, that was it. Just the one word. The merits of the case are of no consequence -- the award is made in recognition of Mr Albanese's profound understanding of the theory of communication. When you have something to say, say it, and then shut up.

(Thanks are due, incidentally, to John McTernan, the former Blair adviser and ex-director of communications for the former Australian prime minister, Julia Gillard.  He tweeted a link to Mr Albanese's admirable statement, thus ensuring that it achieved the global recognition it so richly deserved.)

So here's the point: Green party leader Natalie Bennett (not to be confused with the Israeli right-wing politician Naftali Bennett), former foreign secretaries Malcolm Rifkind and Jack Straw, shadow chancellor Ed Balls -- all took to the air waves over the past few days and dug themselves into unnecessarily deep holes.

If only they had taken a leaf out of Anthony Albanese's book. Be clear, be brief, then stop. When Natalie Bennett found herself in trouble during her excruciating interview with Nick Ferrari on LBC, unable to come up with the figures he was pressing her for, she should simply have ducked.

"Ferrari: So how much would it cost to build the 500,000 new homes that you're promising? And where will the money come from?

"Bennett: I'm not going to go into precise figures now, Nick, but I can assure you we've done the sums and we'll announce the detail in due course."

Similarly if Malcolm Rifkind and Jack Straw had said a lot less after being hit with those deeply embarrassing cash-for-access allegations, they might have been able to come up with a somewhat better response than: "What me, guv? I've done nuffink wrong, honest … "

As for Mr Balls, when Iain Dale starts talking to you about your sex life -- yes, it was a good week for LBC -- it's best to say nothing at all. Claiming to be a "long slow burn" in bed is definitely not a good idea. (I'm glad I'm not the hapless reporter who's bound to be sent out to get a reaction from Yvette Cooper, aka Mrs E Balls.)

Yes, I enjoy poking fun at politicians. It's good for them and keeps them on their toes. But I also acknowledge that we need them -- honest, capable men and women who are prepared to put in long hours getting on with the kind of mind-numbingly tedious, detailed business of politics that would drive the rest of us to distraction.

Having just watched Michael Cockerell's fascinating four-part BBC television series Inside the Commons, I am more appalled than ever at the cack-handed way they're expected to do their jobs. The Palace of Westminster is falling to bits; MPs are constantly constrained by petty-fogging procedural traditions that would turn any sane person into a Guy Fawkes; and the chances for an average backbencher to do anything meaningful are close to zero.

Cockerell called the House of Commons "the most magnificent and maddening institution in Britain." I think he was too kind: if I had my way, they'd start again from scratch. Build a new parliament building, fit for purpose, appropriate for the 21st century. And for God's sake, get rid of all those flunkeys in their frock coats and whiskers.

How on earth is anyone expected to take politicians seriously when they spend their working days in what looks like a cross between a half-forgotten museum of antiquities and Disneyworld?

Oh yes, and pay them more. Their current salary of £67,000 a year (and I am well aware that they are also entitled to a range of allowances and expenses) does not compare favourably with, for example, the average salary of a secondary school head teacher (£73,000) or an NHS hospital consultant (between £75,000 and £100,000).

Finally, could whoever chooses parliamentary candidates please try much, much harder to find people from a wider variety of backgrounds and life experiences? We need far more MPs like Alan Johnson, John Prescott, Mo Mowlam, David Davis and John Major. And far fewer like … well, you can fill in the names yourself.
Posted by Robin Lustig at 09:09